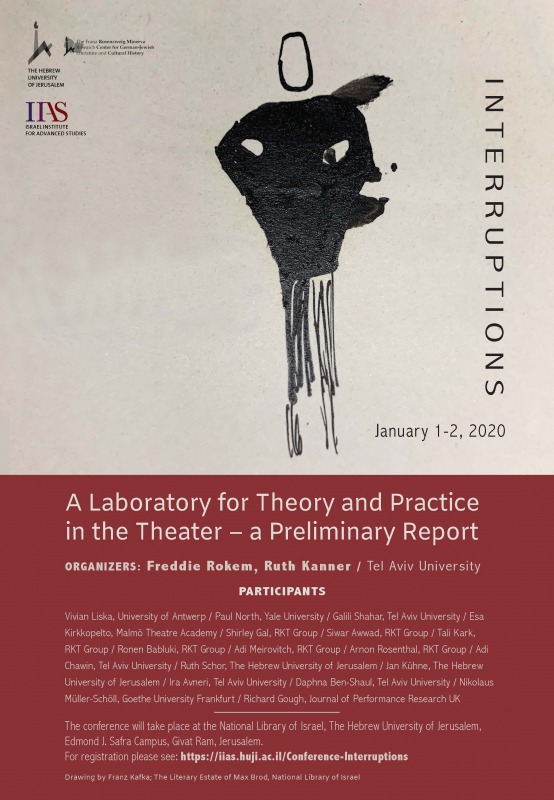 The research laboratory of artists and academics, initiated and led by Ruth Kanner and Freddie Rokem will investigate the notion of Interruptions (shibushim/שיבושים) in the performing arts. The laboratory will provide opportunities to explore and develop the common ground for the forms of thinking/doing developed and expressed in and through artistic creativity and in works of art as well as in academic reflection and research in aesthetics, performance theory and poetics; but also to clarify the differences between the creative and the interpretive processes, even drawing attention to how they ‘interrupt’ each other.

Traditionally, the caesura is a break or pause in a verse where one phrase ends and the subsequent phrase begins or where the verse meter allows for or necessitates such a break. With German Romanticism, in particular through the poet and translator Friedrich Hölderlin, the caesura became the point of departure for a more comprehensive theoretical approach to literature and theatre. Hölderlin’s often enigmatic remarks about the caesura as an interruptive device have been widely interpreted by poets, scholars and philosophers (like Paul Celan, Paul de Man, Werner Hamacher, Philippe Lacoue-Labarthe, Rainer Nägele and others), suggesting that the break (or interruption) created by the caesura is not arresting the continuity of a text but rather serves as a device (or a feature) which structures its form or, as Hölderlin suggested in his “Remarks on Oedipus”, gives form to ‘representation itself’.

Beginning in his early essays about Hölderlin’s ‘literary’ caesura as well as on Goethe’s “Elective Affinities” (Wahlverwandschaften), Walter Benjamin transformed this notion into a theatrical, performative idiom based on the epic theatre of Bertolt Brecht and the writings of Franz Kafka. According to Benjamin the interruption (Unterbrechung) in Brecht’s epic theatre “consists in arousing astonishment (Staunen) rather than empathy (Einfühlung)”, a re/presentation (Darstellung) of conditions rather than by developing individual, consecutive actions based on causality. In the caesura, the interruption of the continuous flow of harmony and wholeness reside the potentials of resistance and change.

The initial triangulation of Kafka, Benjamin and Brecht serves as the basis and point of departure for the explorations and investigations we conduct in the seminar room and the studio, both practically and theoretically; also moving linguistically, geographically and historically to explore the significance of interruptions for the creation and understanding of the arts as well as for their task in our contemporary world.