The objective of the conference is to examine the growing scholarly consensus that new, intensified or modified notions of the Self emerged in the Greco-Roman period. Assembling a group of experts from different fields, we ask whether and how new notions of the Self emerged across “pagan”, Jewish and Christian cultures. What prompted philosophers, exegetes, biographers, theologians, artists and law-makers to conceive of human beings as individuated selves, with a sense of their own subjectivity and an urge to reflect upon themselves? How did authors position themselves in their text and address the reader in a more personal way? What role did religion, Stoicism and the revival of Platonism play? Looking at literary and material evidence, we will investigate if and how a koine of the Self emerged in the imperial period.

To what extent did local cultures transform their traditional notions, paving the way for specifically Greek, Jewish or Christian perspectives, which were formed in dialogue with adjacent cultures? With the ascendancy of Rome, the establishment of monarchical forms of rule and subsequently the Christianization of the empire universal structures became available, which created new channels of communication and challenged traditional roles in society. The individual was confronted with new social and intellectual options, yet also with a loss of political power and democratic self-expressions. Intellectuals were thus prompted to define their role on a new scale, often taking recourse to the private sphere. These themes will be explored in different sessions on the following topics: “Between Center and Periphery: Constructing the Self in the Roman Empire”, “Contours of Interiority”, “Trajectories of Interiority”, “The Self in Action: Society, Law and Liturgy” and “Philosophical Reflections on the Self”.

Clifford Ando, "Self, Society, Individual and Person in Roman Law"
Catharine Edwards, "The epistolographic Self: Letter-Writing, Empire and Identity”

The Conference is sponsored by The European Union’s Horizon 2020 research and innovation program, The EU project and The Notre Dame Workshop on Ancient Philosophy (ancientphilosophy.nd.edu). 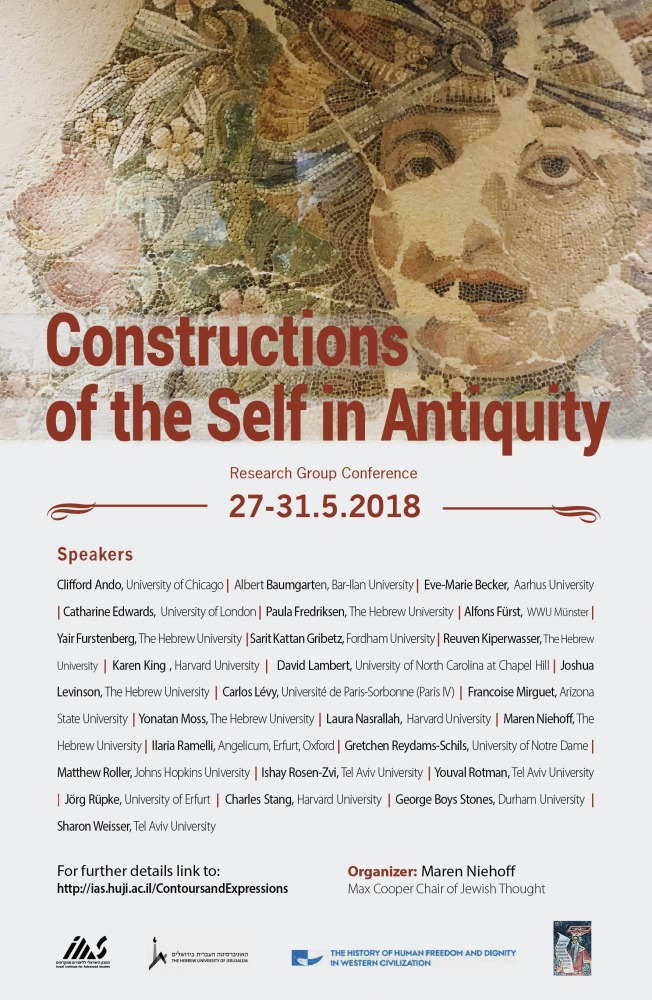