The objective of this conference is to place center stage the cultural status of Jewish women in societies characterized by Islamic dominance, or a significant Muslim presence. By examining the lives of Jewish women across the Muslim world, from Afghanistan to Morocco, from Yemen to Ottoman Europe and from the Middle Ages until the modern period, we will focus attention on varieties of women's cultural capital and offer comparative perspectives.

What were the types of cultural capital available for women? How might women leverage cultural capital into improved social status? What was the relationship between Muslim standards of accepted female behaviors and Jewish ones? How did Jewish society respond to fashions and trends set by their Muslim neighbors? How did Jewish women's behavior affect Muslim society? What were the politics of family life in the differential cultural and social settings?  How important was religion as a vehicle both for maintaining gender relations and for altering them?  What different kinds of circumstances fostered crossing gender boundaries and what were the methods for doing so?

Always hovering will be the question of the differences and similarities between Jewish and non-Jewish cultures. Jewish women in many ways will serve as a test case. For example, what connected minority and majority cultures and what separated them? By analyzing Jewish women's lives we hope to discover a shared band of culture and determine its strengths and widths alongside its absences. On the other hand we will examine to what degree cultural accommodation combined with social alienation typify Jewish women's lives wherever they lived.

We will also question how strong a factor the cultural construction of gender was in determining the social order. Did Jews' minority status necessitate adjustments in gender hierarchies that non-Jews were exempt from? Or was gender so fundamental that economics, law, politics and sociology were usually in its service?

In relations with non-Jews, how did gender tropes and Jewish stereotypes interact? Did anti-Judaism and Jew-hatred trump gender, or perhaps reinforce it?

With respect to the comparative dimension, we encourage comparison of the cultural circumstances of Jewish women in a variety of Muslim societies. In addition we will compare Jewish women's cultural capital under Islam with that of Jewish women in Christian-dominated societies in Ashkenaz, modern European states and elsewhere. Such comparisons can help assess those aspects of women's cultural experience that derive from Jewish culture, and connections with other Jews, and how they are affected by the hegemonic culture.

All conference sessions will be held at the Israel Institute for Advanced Studies on Givat Ram in Jerusalem. 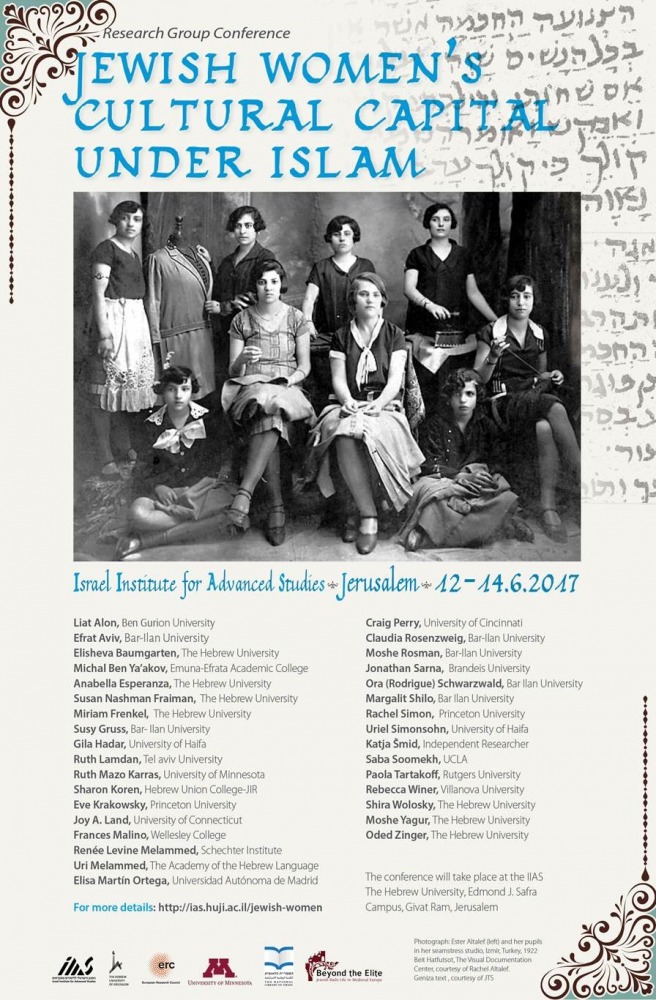