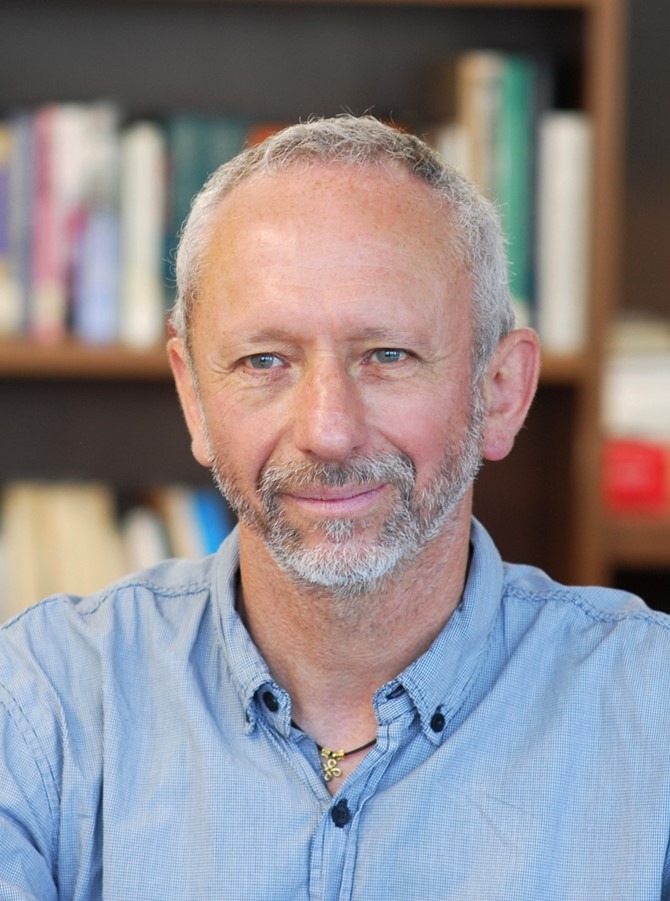 This week's Featured Fellow is Eric Wajnberg, the Head of Research at SPE, INRAE, and co-organizer of our Research Group, "Mathematical Modelling of Biological Control Interaction to Support Agriculture and Conservation". We spoke to Eric about insect behaviour, biometry, and film-making…

What research are you working on during your time at the IIAS?

My work is divided between editorial work and research. For the editorial part, I am a member of the editorial board of a few international journals, and I'm the Editor-in-Chief of the BioControl academic journal.

For my research, I use theoretical approach to understand insect behaviour. We want to understand what behaviour these insects are using to maximize their reproductive success, so we are using theoretical models to see what is the optimal behavioural strategy used by animals to help maximizing the number of progeny they produce. We build models, use mathematical equations and sometimes complex computations, and then design experiments to see if the insects follow the model’s predictions. Funnily enough, most of the time their behaviour does follow our models, and we want to understand why this is.

Insects are short-lived: most of the time they live for a couple of hours, and sometimes a couple of days, so they have to be really accurate in the way they organize and manage their time. The insects that we are investigating are parasitoids, which means that they lay their eggs in other insects, and kill the host when the eggs produce larvae and eat the host. These parasitoids therefore act as insecticides, and so we are using them for biological control of the nasty insects that are attacking our crops. When we are studying what pushes those insects to optimize the number of progeny they produce, we also understand how they maximize their impact on the pest, and so our research has an applied perspective.

I spend a lot of time on really tiny insects, less than a millimetre long. These are the most intensively produced animals on the planet, with “factories” that produce zillions of insects. In Europe, we release about 300,000 insects per hectare of corn, and we treat several hundred thousand hectares of corn all over Europe.

What is an example of insect reproduction behaviour that you're researching?

The insects we are working with are able to do a lot of things that we, humans, cannot do. For example, they are able to decide the sex of their progeny, and they have a specific mechanism that allows them to choose whether to lay a male or a female egg. We want to understand how they use such mechanisms to maximize their reproductive output. We have found that they lay males and females in specific sequences that we can describe statistically. Hence, we produce mathematical models to predict whether a male or female will be laid in a specific situation, and then we test these models by creating experiments that place the insects in such scenarios.

Insects are really convenient to experiment on. You have a new generation each week, it costs almost nothing to breed them, and you can do really accurate experiments in a lab with cameras, computers etc. Although the biological models we use could also, hypothetically, be tested on other animals, it is definitely easier to experiment on insects than elephants!

How did you first get into the field of ecology?

My university career has been in a field that lies somewhere between maths and biology – biometry – which applies mathematical tools, especially statistical tools and computer science, to biology. I have always been more interested in the mathematical approach.  Biologists spend their entire life collecting data, which they have to analyse it in the correct way, and this is my niche. The fact that I'm more on the theoretical side means that there are always people knocking on my door trying to ask me how to develop theoretical models for their own insects, so I am working on a lot of insect species.

How has your time been at the IIAS so far?

It's a really great opportunity. I was extracted from my day-to-day work and I can really focus on my research. Together with Tamar Keasar and Michal Segoli, we were able to build a dream team. Most of the members of our group have all known each other for decades, and we are all friends, so it is not only scientific and academic activity here, there is also the social dimension, which is lovely. I am really enjoying it. Our group is here for 5 months, but I wish we were here for longer!

What do you like to do outside of your research?

I am a guitar player, but I am a really poor guitar player. I enjoy bossa nova, which is Brazilian jazz music that was famous in the 60s and 70s, and that is the style of music I like to play. I also love art, and have enjoyed visiting the Tel Aviv Museum of Art and the Israel Museum.

Can you tell us a bit about the short film you created?

A few years ago, I received a grant from the European Science Foundation to make a 30-minute film on parasitoids. The film explains the theoretical models used to make predictions about the efficacy of the parasitoids when trying to control pests.

The film was made for the general public, and was created with open access, so anyone in the university system can use it for teaching. The film is made in a Sherlock Holmes detective story style that surveys Europe. We designed some cartoons for it, and we also had a musician to compose the music. It took eight months to write, and four months to shoot, so it was a whole year of work! I was in charge of the scientific part, and I connected with professional filmmakers for the production. The movie was a real success, and we received some international awards for it.