The conference will be live-streamed on the IIAS Facebook page.

Odessa was, in the first half of the nineteenth-century, a new boom town on the Black Sea, on the periphery of the Russian empire, but was home to French, Turks, Greeks, Italians and other foreigners and looked eastwards to the Levant and the Mediterranean, which facilitated both commercial and cultural exchange across the Black Sea. In 1897 Jews made up a third of the population of the city and constituted a growing large minority that was increasingly Russian-speaking and acculturated but, for all its internal heterogeneity, was also conscious of ethnic difference. Odessa, which was experiencing a downturn in its economic fortunes by the end of the nineteenth century, was also one of the first Russian cities to welcome modernity—the telegraph, steamships, motor cars, aviation, and the early cinema, to give just a few examples. The city saw an inflow of Ukrainian laborers, but a Ukrainian cultural presence was felt only later.

The imperial Russian intellectual elite, itself diverse in origin and ideological allegiances, notwithstanding anti-Semitism and xenophobia, shared several cultural spaces with Jews and other minorities in literary clubs, the theater, cafes, or literary magazines and newspapers, not to mention publishing houses and poetry readings. While in the heyday of modernism in the early twentieth century it seems to have been impossible to divide off ethnic spaces, we nevertheless observe the emergence of specifically Jewish cultural spheres, constituted by particular spatial practices.

Odessa was the cradle of modern Hebrew literature, but also boasted a vibrant Yiddish culture (though hardly comparable with Lvov or Warsaw). Modernization blurred traditional ethnic and religious differences, replacing them with new alignments and divisions, which need to be understood in their concrete spatial, urban context. The difficulty in defining Jewish culture in the modern period is not eased by the old divisions of history into “Jewish” and “non-Jewish” which ignore not only the contacts between Jews and non-Jews, but also the fact that Jews and non-Jews shared social and cultural spaces and were part of an ethnic mix that faced modernity in similar and different ways.

This international workshop is the first to bring together anthropologists, historians, cultural studies scholars, literary specialists and musicologists to discuss the theoretical and practical aspects of Odessa's unique cosmopolitan network before the Russian Revolution and in its immediate aftermath. The workshop aims to set up a new paradigm for understanding cosmopolitanism in the urban centers of the Russian and Austro-Hungarian empires, as well as in east European Jewish history, and other multiethnic societies. It will cover a range of interdisciplinary approaches to inter-ethnic and trans-cultural relations with a particular focus on the unique cosmopolitan networks in Odessa in the period 1895-1925. Among the topics to be discussed will be 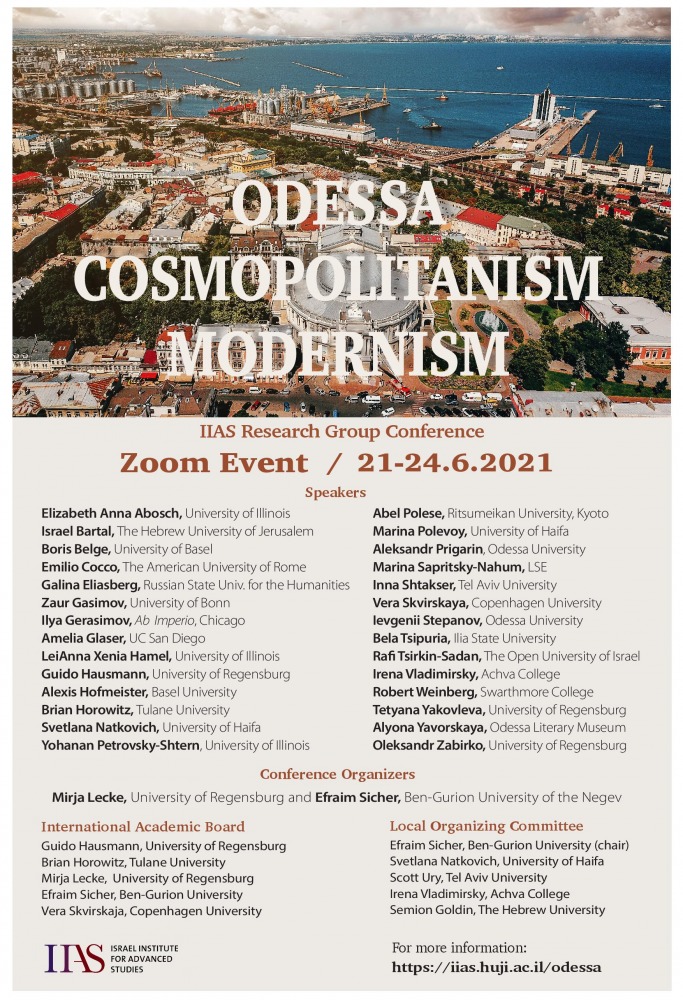