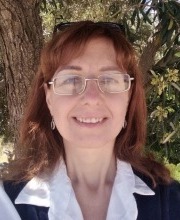 INDIVIDUAL FELLOW
University of Odessa
Maria Kravchyk was an associate professor in the field of philosophy and culture at the International Humanitarian University in Odessa, and is currently in Israel.
Her background in the study of philosophy as well as past work over her dissertation belonged to the field of Philosophy of Culture and were related to the different theoretical aspects of History and Methodology of Culture, especially in Antiquity. Later, however, her research has taken a different direction – following the series of lectures and seminars in Jewish History, Philosophy and Culture, that took place in Odessa Mechnikov National University in the years 2011-2016 with the support of the Hebrew University of Jerusalem. It was her participation in those events that would influence the above change, as now my attention to links between philosophy and religion focused primarily on the context of Jewish-Christian relations in late Second Temple period and, broader, late Antiquity.