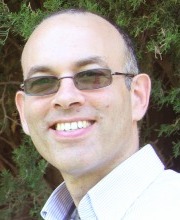 Roy Kishony is the Marilyn and Henry Taub Professor of Life Sciences at the Technion-Israel Institute of Technology and a Visiting Faculty at the Department of Systems Biology at Harvard Medical School. Prof. Kishony received his B.A. in Physics and Mathematics from the Hebrew University and his Ph.D. in Physics from Tel-Aviv University (1999). He moved to Biology as a postdoc at Princeton and Rockefeller Universities. In 2003, he started an independent laboratory at Harvard University, first as a Bauer Fellow and then as a member of the newly established Department of Systems Biology at Harvard Medical School, where he became a Full Professor. As a physicist at a major medical school, Prof. Kishony became fascinated by the urgent public health concern over the rapid evolution of antibiotic resistance. His combined theoretical-experimental background enabled him to define key questions in evolution of resistance in bold new ways. His lab has made a series of ground-breaking discoveries, showing how some drug interactions can select against resistance, unraveling mechanisms that keep resistance in check in natural ecological environments, and pioneered unique experimental and theoretical methodologies for tracking whole-genome evolution of pathogenic bacteria. These new approaches and discoveries inspire novel treatment paradigms for effective antimicrobial chemotherapy and genome-based diagnostics. Bringing his expertise in Microbial Evolution, Antibiotic Resistance, and Pathogen Genomics, Prof. Kishony has recently joined the Faculty of Biology at the Technion to develop an interdisciplinary initiative in quantitative biology at the Technion’s Lorry Lokey center for Life Sciences and Engineering.

Kishony received the Genzyme award for outstanding achievements in biomedical sciences (2009), a Gates Foundation Grand Challenge Award (2008), a Complex Systems award from the McDonnell Foundation (2008) and the Sanofi-Pasteur award (2013) for “established the quantitative principles governing evolution of resistance in multi-drug treatments, creating a new discipline at the intersection of pharmacology, systems biology, and evolution”. His research has attracted significant attention and has been featured in the general media, including in the Wall Street Journal, Boston Globe, Scientific American, Nature News, 60-Minutes Australia and the BBC.