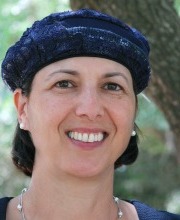 Professor Shulamit Levenberg is the dean of the Faculty of Biomedical Engineering at the Technion – Israel Institute of Technology. She also serves as the director of the Technion Center for 3D Bioprinting and The Rina and Avner Schneur Center for Diabetes Research. Prof. Levenberg earned her PhD at the Weizmann Institute of Science, and pursued her post-doctoral research in tissue engineering at Prof. Robert Langer's lab in MIT. In 2004, she joined the Technion, where she conducts interdisciplinary research on stem cells and tissue engineering.

Prof. Levenberg was named by Scientific American as a “Research Leader” in tissue engineering, for her seminal work on vascularization of engineered tissues. She is the recipient of numerous awards and accolades, including the Krill Prize for excellence in scientific research, awarded by the Wolf Foundation, the France-Israel Foundation Prize, the Italian Excellence for Israel Prize, the Teva Research Prize, the Juludan Research Prize, and the Rappaport Prize for Biomedical Sciences.