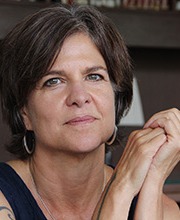 FELLOW
Syracuse University
Virginia Burrus is the Bishop W. Earl Ledden Professor of Religion at Syracuse University. Prior to joining the Syracuse faculty she taught for twenty-two years at Drew University. Her teaching and research interests in the field of ancient Christianity include: gender, sexuality, and the body; martyrdom and asceticism; ancient novels and hagiography; constructions of orthodoxy and heresy; histories of theology and historical theologies.  She is currently working on a book tentatively titled Ancient Ecopoetics, which engages late ancient texts from the perspectives of ecocriticism, new materialism, posthumanism, and animal studies; the nexus of contemplation, ritual, sensation, and affect are among the central concerns of this work.  Other current research interests include dialogism in ancient Christian literature and the editing and translation of the Latin hagiographical text Vita Constantinae.  Professor Burrus is a past president of the North American Patristics Society and a founding co-editor of the University of Pennsylvania Press series “Divinations: Rereading Religion in Late Antiquity.”