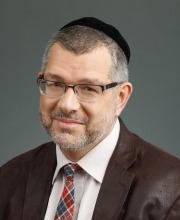 Yohanan Petrovsky-Shtern (Ph.D., Brandeis University, 2001, Ph.D. Moscow University, 1988) is the Crown Family Professor of Jewish Studies and a Professor of Jewish History in History Department at Northwestern University. He teaches a variety of courses that include early modern and modern Jewish History; Jews in Poland and Russia; Jewish Mysticism and Kabbalah; history and culture of Ukraine; and Slavic-Jewish Literatures.

His research was supported by the DAAD Foundation, Rothschild Foundation, Fulbright, Davis Center at Harvard, Kosciuszko Foundation, the Memorial Foundation of Jewish Culture, and the National Endowment for the Humanities, the Ukrainian Jewish Encounter, the Lady Davis Foundation and the Institute for Advanced Studies at Hebrew University, Jerusalem. For his teaching, Petrovsky-Shtern won a Northwestern University Distinguished Teaching Award.

He has been a visiting professor at the universities in Toronto, Paris, Kyiv, Lviv, Warsaw, Krakow, Munich, and Jerusalem.

For his expertise, Petrovsky-Shtern has been appointed a Fulbright Specialist on Eastern Europe; a Fellow at the Harvard Ukrainian Research Institute; a Visiting Professor at the Free Ukrainian University in Munich, and an honorary doctor of the National University Kyiv Mohyla academy in Kyiv.

He has published more than a hundred articles and six books, including most recently The Golden-Age Shtetl: a New History of Jewish Life in East Europe that appeared in paperback with Princeton University Press, 2015.

He appeared with commentaries on the situation in Ukraine at Chicago Public Radio, Associated Press Radio, National Public Radio, and also on TV at ZiK, Al Jazeera, WTTW and CBS.

In addition to his teaching and research, he is also an amateur artist whose conceptualist figurative artwork appeared in several museums including Spertus Museum Gallery in Chicago and Ukrainian Museum in New York.

At present YPS is working together with Dean Phillip Bell on a documentary history The Jews in the Early Modern World, 1450-1750 (Oxford University Press).