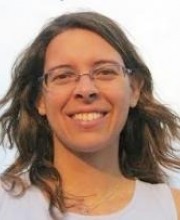 FELLOW
University of Bristol
Corinna Ulcigrai received her PhD from Princeton University in 2007, under the supervision of Ya. G. Sinai. She is currently a Lecturer and Research Fellow in the School of Mathematics at the University of Bristol. Her research interests include ergodic theory and Teichmueller dynamics. She has worked on the ergodic and spectral properties of flows on surfaces, interval exchange transformations and parabolic flows and is interested in the dynamics in moduli spaces of flat surfaces and in ergodic theoretical problems related to number theory and diophantine approximation. Publications include “Absence of Mixing in Area-Preserving Flows on Surfaces,” in Annals of Mathematics, 173, 3, 2011 and “Mixing Time-Changes of Heisenberg Nilflows,” with A. Avila and G. Forni, in Journal of Differential Geometry, 89, 3, 2011. In 2012, at the 6th EMC Congress in Krakow, she was awarded a European Mathematical Society Prize for young mathematicians.