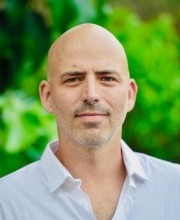 Yaniv Iczkovits, born in 1975, is an award-winning author and screenwriter. He has published four novels and one novella, and is now working on developing TV content based on his novels for Keshet and KI, Yes, Endemol Shine and more. His books include Pulse (Hakibbutz HaMeuchad), which won Haaretz’s debut novel prize and was translated into Italian; Adam and Sophie (HaSifriya HaHadasha), which won the Prime Minister’s Prize for Hebrew Writers; and Laws of Succession, a novella published in the anthology “There’s a Story Behind the Money” (Achuzat Bayit). His third novel, The Slaughterman’s Daughter, was published by Keter in August 2015 and was awarded the Agnon Prize (2016). Iczkovits won the Ramat Gan Prize (2017) for literary excellence and the People of the Book Foundation Prize (2017). He was shortlisted for the Sapir Prize, and has now been nominated for the British Wingate Literary Prize (2021). The Economist and The Sunday Times selected The Slaughterman’s Daughter as one of the best books published in Britain in 2020, and The New York Times and Kirkus selected the book as one of the top books to look forward to in 2021 in the U.S. In August 2020, Iczkovits published his recent book, Nobody Leaves Palo Alto (Keter) which immediately became a number one best seller in Israel and won critical acclaim.

Iczkovits studied at the Adi Lautman Interdisciplinary Program for Outstanding Students at Tel Aviv University, and during his Master's degree he spent a year as a Chevening scholar at the University of Oxford. His doctoral dissertation dealt with Ludwig Wittgenstein's thought and analyzed the interplay between ethics and language. He taught for eight years at Tel Aviv University, and after receiving his Ph.D., he went on to pursue postdoctoral research at Columbia University in New York, where he adapted his doctoral dissertation into the book Wittgenstein's Ethical Thought (Palgrave Macmillan 2012).

He currently lives in Tel Aviv with his wife and three daughters.