Linda Safran. 2020. “A Prolegomenon to Byzantine Diagrams.” In The Visualization of Knowledge in Medieval and Early Modern Europe. Brepols. Publisher's Version 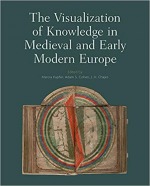 This paper is, quite literally, a first word about the subject of Byzantine diagrams as a whole. Neither the Oxford Dictionary of Byzantium, nor Oxford Handbook of Byzantine Studies, nor the Reallexikon zur byzantinischen Kunst has an entry on diagrams, and the Wiley-Blackwell Companion to Byzantium contains not a single mention of the term. Thus far, diagrams in the Byzantine tradition have only been approached in narrow disciplinary terms. In this paper, I survey the various types of diagrams included in Byzantine manuscripts from the eighth to the sixteenth century. I classify them by subject and consider selected examples in detail, then conclude with observations about the differences between Byzantine and Western medieval diagrams and why these differences exist.