Skip to main content
HOME / PUBLICATIONS / HUMANITIES / Debate by the Book, about the Book, in a Book: Shem Tob Falaquera’s Epistle of the Debate, Al-Fārābī’s Book of...

Yehuda Halper. 2021. “Debate by the Book, about the Book, in a Book: Shem Tob Falaquera’s Epistle of the Debate, Al-Fārābī’s Book of Dialectic, and Aristotle’s Topics on Philosophy and the Holy Writ.” In Studia graeco-arabica, Pp. 93-106. Pisa: Pisa University Press. Publisher's Version 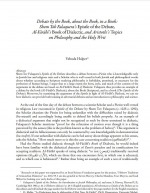 Shem Tov Falaquera’s Epistle of the Debate describes a debate between a Pietist who is knowledgeable only in Jewish law and religious texts and a Scholar who is well versed in both Jewish and philosophical works about whether according to Scripture studying philosophy is forbidden, permitted, or necessary for the perfection of human beings. I argue that to a large extent the form, style, and much of the content of the arguments in the debate are based on Al-Fārābī’s Book of Dialectic. Falaquera thus provides an example of a debate by the book (Al-Fārābī’s Dialectic), about the Book (Scripture), and in a book (The Epistle of the Debate). Moreover, by examining the arguments of the Epistle in light of Al-Fārābī’s Dialectic, we can see how dialectic can provide both training in adversarial debates and an introduction to philosophy and science.