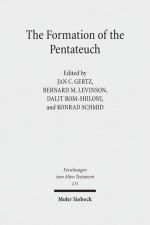 The Pentateuch lies at the heart of the Western humanities. Yet despite nearly two centuries of scholarship, its historical origins and its literary history are still a subject of intense discussion. Critical scholarship has isolated multiple layers of tradition, inconsistent laws, and narratives that could only have originated from separate communities within ancient Israel, and were joined together at a relatively late stage by a process of splicing and editing.
Recent developments in academic biblical studies, however, jeopardize the revolutionary progress that has been accomplished over the last two centuries. The past forty years of scholarship have witnessed not simply a proliferation of intellectual models, but the fragmentation of discourse within the three main research centers of Europe, Israel, and North America. Even when they employ the same terminology (redactor, author, source, exegesis), scholars often mean quite different things. Concepts taken for granted by one group of scholars (such as the existence of the Elohist source) are dismissed out of hand by other scholarly communities.
In effect, independent and sometimes competing scholarly discourses have emerged in Europe, Israel, and North America. Each centers on the Pentateuch, each operates with its own set of working assumptions, and each is confident of its own claims. This volume seeks to stimulate international discussion about the Pentateuch in order to help the discipline move toward a set of shared assumptions and a common discourse. With the wide range of perspectives examined, this publication is an invaluable resource for subsequent research.