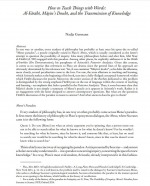 In one way or another, every student of philosophy has probably at least once hit upon the so-called “Meno paradox”, a puzzle originally raised in Plato’s Meno, which is usually considered as the latter’s attempt to question the possibility of inquiry. Like many philosophers before and after him, Abū Naṣr al-Fārābī (d. 950) engaged with this paradox. Among other places, he explicitly addresses it in his Kitāb al-burhān (On Demonstration), his paraphrase of Aristotle’s Posterior Analytics. Given this context, it comes as no surprise that references to Plato are absent, since the general lines of his approach are obviously determined by his reference text. Yet, if one examines “Māyin’s doubt”, as he dubs the dilemma, more closely, several peculiarities come to the fore. For one, the terse allusions to teaching and learning, which Aristotle makes at the beginning of his book, turn into a fully-fledged conceptual framework within which Fārābī discusses the puzzle. Moreover, the entire section of the Burhān dedicated to this problem is distinguished by the strong emphasis Fārābī puts on the use of language within the context of teaching and learning – an emphasis that lacks a parallel in the Posterior Analytics. Thus, it soon becomes clear that Māyin’s doubt is not simply a summary of Meno’s puzzle as it appears in Aristotle’s work. Rather it is an engagement with the latter designed to answer contemporary questions. But what are the questions Fārābī’s discussion of the paradox is meant to answer? And what answers does he give to them?