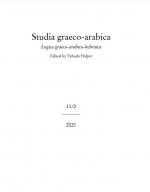 The articles in this special issue grew out of a conference on “Aristotelian Logic in Medieval Cultures: Hebrew, Arabic, and Latin” that took place in Jerusalem and Ramat Gan in June of 2019. The conference was the culminating finale of a year-long research group that Charles H. Manekin and I directed on “The Reception and Impact of Aristotelian Logic in Medieval Jewish Cultures” at the Israel Institute for Advanced Studies in Jerusalem.
The purpose of the research group was to explore how and why medieval Jewish cultures studied Aristotelian logic. In doing so, we sought to examine not only what medieval Jews studied when they studied logic, but what social, cultural, and religious factors contributed to their interest in logic. For most medieval Jews, the study of logic was seen as the foundation of universal knowledge, that is knowledge not specifically tied to Jewish content. Indeed, while the study of logic grew and thrived in Hebrew throughout the Middle Ages and Renaissance, the foundational texts were all translations into Hebrew either from Arabic or from Latin.
As a result, the study of Aristotelian logic in medieval Jewish cultures was always closely tied in with the study of logic in medieval Muslim and Christian cultures. Additionally, the Aristotelian origins of logic meant that it was in some respect always connected to Aristotle, the Greek culture in which he arose, and the ensuing Greek and Latin commentary cultures. From the outset, then, the research group approached the study of Aristotelian logic in medieval Jewish cultures not only as a study of the logicians themselves, their logical contributions, and their writings, but as a general study of medieval logic and its social history as it arose and developed in the linguistic, cultural, and religious orbits of Islam, Christianity, and Judaism.