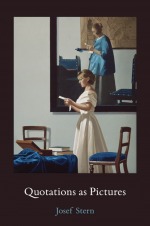 In Quotations as Pictures, Josef Stern develops a semantics for quotations using explanatory notions drawn from philosophical theories of pictures. He offers the first sustained analysis of the practice of quotation proper, as opposed to mentioning.
Unlike other accounts that treat quotation as mentioning, Quotations as Pictures argues that the two practices have independent histories, that they behave differently semantically, that the inverted commas employed in both mentioning and quotation are homonymous, that so-called “mixed quotation” is nothing but subsentential quotation, and that the major problem of quotation is to explain its dual reference or meaning—its ordinary meaning and its metalinguistic reference to the quoted phrase attributed to the quoted subject.
Stern argues that the key to understanding quotation is the idea that quotations are pictures or have a pictorial character. As a phenomenon where linguistic competence meets a nonlinguistic symbolic ability, the pictorial, quotation is a combination of features drawn from the two different symbol systems of language and pictures which explains the exceptional and sometimes idiosyncratic data about quotation.
In light of this analysis of verbal quotation, in the last chapters Stern analyzes scare quotation as a non-literal expressive use of the inverted commas and explores the possibility of quotation in pictures themselves.