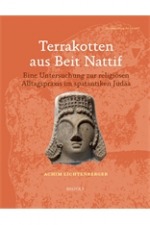 This is the first comprehensive publication and exhaustive study on the terracotta figurines found in two Roman cisterns in Beit Nattif in Judaea. In total more than 400 figurines, mainly females, riders and animals from Beit Nattif and other places are classified, discussed and interpreted in this monograph. These figurines have a very characteristic style and they display only little Greco-Roman influences. The repertoire and iconography can be related to forerunners from the Iron Age. The terracotta figurines from Beit Nattif are important evidence for religious practices in the region and they offer the possibility to discuss the religious affiliation as well as the religious or magic practices of their owners. The study argues that the figurines attest to a local population in post Bar-Kochba Judaea, which was deeply rooted in a Near Eastern Semitic tradition. They used models and concepts which were familiar to Jewish and pagan traditions and the find complex raises the question about the religious affiliation of the consumers of the figurines.