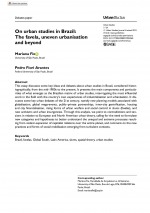 This essay discusses some key ideas and debates about urban studies in Brazil, considered historiographically, from the mid-1900s to the present. It presents the main components and particularities of what emerges as the Brazilian matrix of urban studies, interrogating the most influential work in the field with the country’s own experiences of industrialisation and urbanisation. It discusses some key urban debates of the 21st century, namely new planning models associated with globalisation, global mega-events, public–private partnerships, inner-city gentrification, housing and city financialisation, rising forms of urban warfare and social control in slums (favelas), and new activisms and urban insurgencies. Through this analysis, we point to contradictions and tensions in relation to European and North American urban theory, calling for the need to formulate new categories and hypotheses to better understand the unequal and extreme processes resulting from violent expansion of capitalist relations over the entire planet, and comment on the new practices and forms of social mobilisation emerging from turbulent contexts.