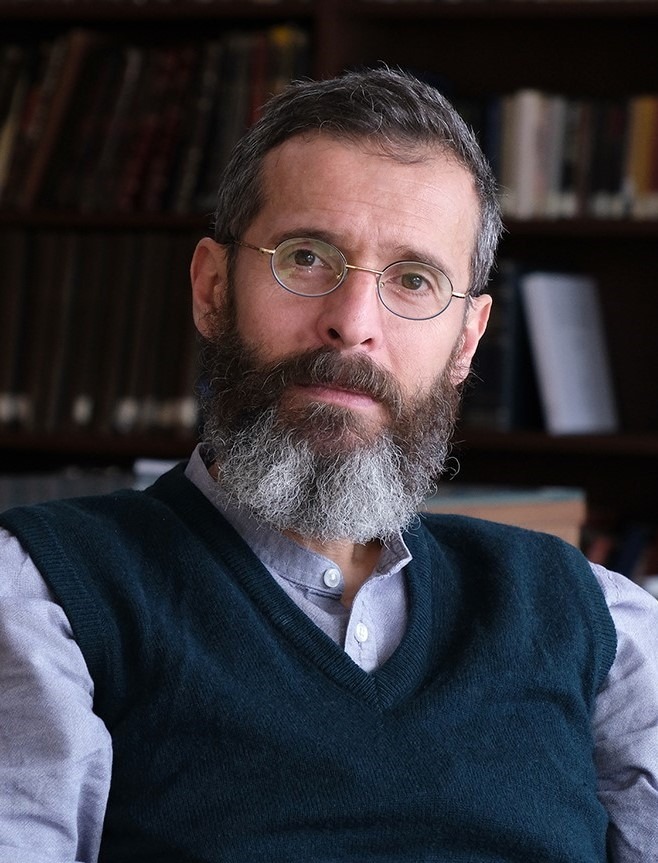 This week's Featured Fellow is Yaakov Mascetti, a senior lecturer in Comparative Literature at Bar-Ilan University and the organizer of our Research Group, "Sensing the Truth: Changing Conceptions of the Perceptual in Early Modern and Enlightenment Europe". We found out about metaphysical poetry, life at the IIAS, and the challenge of being productive.

What are you working on during your residency at the IIAS?

My project is a new direction in my scholarly work. I have been studying the Renaissance since I finished my doctorate, and the trajectory of my research has led me to focus on sensorial perception in literature during this period, whether in sermons or political speeches. I am looking at the ways in which metaphysical poets and religious figures such as John Donne or Lancelot Andrewes used their linguistic skills to educate listeners through the senses, and how written and spoken words help make concepts tangible. Some of these sermons provide the listeners with a sweet taste in their mouth; they listen to the sermons and they taste the text of the scriptures and the sweetness of the words.

We have a considerable number of scholars in our group who specialize in the senses, so I'm working on learning as much as possible from my fellow colleagues!

Metaphysical poetry sounds complex – how would you define it?

Metaphysical poets were a number of poets who followed John Donne (1572-1631) and imitated his poetry style using powerful descriptions of feelings, experiences and dogmas to express love, not only of a man for a woman but also of a man for God. It's extremely demanding and thus not very popular. By the 18th century it had almost disappeared, but it resurfaced with T.S. Eliot who placed these poets back on the scholarly map in the 20th century, and they have been at the forefront ever since. They’re still exotic and very, very hard to understand, but certainly more popular than in the past.

In the 1750s, Samuel Johnson was very critical of metaphysical poets because they take “the most heterogeneous ideas [which are then]… yoked by violence together.” A person with Johnson’s sensibility would have failed to appreciate the beauty in a poetic comparison of love and the union of two people to a flea sucking the blood from two human beings, as John Donne does in his poem, 'The Flea'. It's a very powerful metaphor, but it's also demeaning and forces you to both deal with the disgust and try to understand what the poet is expressing. Overall, metaphysical poetry is a very thick, really tasty smoothie made out of philosophy, theology, cosmology, and all sorts of discourses of the early modern period. But it’s certainly not for all palates…

How did you first get interested in this field of research?

I'm originally from Italy and I did my BA in a state university in the Italian Renaissance town of Perugia – I actually started studying chemistry, and then switched to literature. The professor I chose for my final thesis was obsessed with John Donne, and he passed on this obsession to me. After I moved to Israel, and returned to academia after a five-year break, I decided to continue working on John Donne.

When did you move to Israel?

I moved here 25 years ago. First I was in a religious kibbutz in northern Israel, called Sde Eliyahu. I was almost certain that I was going to be a kibbutznik and work in agriculture for the rest of my life. Then I met my wife, and she had no intention of staying on a kibbutz, so after we got married I started my PhD and returned to academia.

The academic community is grateful that you did! How's the IIAS so far?

It's very intense, but it's wonderful. It's just like a dream come true. The standards are extremely high, and the infrastructure provides a lot of flexibility. Plus, having a Hebrew University faculty card allows me to order books from the library. The encounters, the collegiality of the atmosphere… the place is amazing.

Do you have a favourite spot in Jerusalem?

I love the First Station complex. I like the vibe of that whole area from Derech Beit Lechem all the way down to the First Station, and my son always goes to the nearby Silo Café for honey & ginger tea.

What was your experience of working during the pandemic?

It was very difficult. I tried to work on my projects, but having no library access and needing to download everything was complicated. I baked bread. Everyone was baking sourdough bread, including myself… it was the only thing you could do. That, and not going crazy.

On Twitter, my colleagues kept using this horrific term: 'being productive'. I couldn't understand how to deal with this concept. The productivity of humanity is a topic that I'd like to research at some point: how productive are we supposed to be; how much are we supposed to contribute and feel that we're doing something? The productivity theme is much more common in Anglo-Saxon academia and in America, where they have this puritan work ethic of always needing to work and produce output. And me, I'm an Italian living in the Middle East. In terms of work-ethics, it couldn't get any worse!

I have always loved to run. That’s one of the things that kept me mentally healthy (whatever that means!) during the pandemic. I also love cooking and photography – mostly portraits and urban photography.

And finally, recommend a good movie:

One of Bernardo Bertolucci's last movies, 'Little Buddha'. It works on two narrative tracks: one is the story of Siddhartha and his journey from privileged prince to enlightened Buddha, and the parallel story is that of three children who are believed by local Buddhist monks to be the reincarnation of the late Dalai Lama. It's a beautiful, very well-made movie.